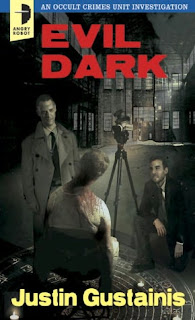 My name's Markowski. I carry a badge. Also, a crucifix, some wooden stakes, a big vial of holy water, and a 9mm Beretta loaded with silver bullets.

A series of seemingly motiveless murders of supernatural creatures points to a vigilante targeting the supe community. Markowski wouldn't normally have much of a problem with that, but his daughter may be next on the killer's list...

Plot: 4.5 Stars
I love the balance between cop procedural and the paranormal in this series. Stan and Karl are a part of the Occult Crimes Unit, and its no different from any other police unit, except for the paranormal creatures. On any given day, Stan and Karl are tring to solve numerous cases involving werewolves, vampires, goblins, witches, and any of the other supernatural creatures that are living in Scranton. If this series was made into a tv show, it would be something like Law and Order: Paranormal Victims Unit.

Pace: 4.5 Stars
This novel was non-stop Paranormal cop drama/action. From the very first page, I was sucked right back into the author's gritty world. This time around I already knew about the no-chapters-only-page-breaks thing, and I didn't even notice. My favorite part about this novel was that Stan and Karl has other cases to work around the big case that was the main focus. These cases filled the spaces between twists and turns, which meant there was no downtime for my brain to wander. This was a fast-paced, gritty Urban Fantasy that I didn't want to put down.

Characters: 4.5 Stars
Although I enjoyed learning more about Stan and Karl, I was really excited to learn more about Stan's daughter, Christine. Between Karl and Christine, Stan's opinion of Supes, or supernatural creatures, has been turned upside-down. It's forced him to face some hard truths, and even get into a couple of arguments. It was also nice to see more of Rachel, a witch that the precinct hires as a consultant for cases. There were also a couple of FBI agents that were introduced, and it was very interesting to see how they interacted with the cops within the precinct. There were also numerous characters introduced as Stan and Karl made progress in their cases, with a few surprises mixed in.

Cover: 4 Stars
If you put this cover next to its predecessor, there's no mistaking that the two go together. The main image of the cover is a bit grainy, like its an actual crime scene photo. Which fits considering the image is a crime scene straight out of the pages of the novel. The bold fonts and font colors draw your attention, while the detailed crime scene keeps it. I liked that a little bit of yellow was used in this cover, since it was so prominent in the first cover. But the addition of red for the title was a great idea, considering how much blood is involved in the cases within the novel.

Disclosure: I purchased a copy of this novel for my own reading pleasure.
Posted by Sara M at 2:27 PM