I would like to welcome Gini Koch to Sara's Urban Fantasy Blog to promote her new self-published book The Night Beat, Book #1 in the Necropolis Enforcement Files. Today, I have an excerpt from The Night Beat, and stick around to the end because there will be a giveaway! 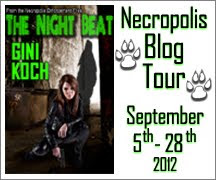 Thanks for stopping by on the Necropolis Enforcement Blog Tour of 2012! If you haven’t read the first chapter of The Night Beat, hit Deathless Prose over at my website (http://www.ginikoch.com/deathlessprose.htm) and check it out. Then, hit each stop along the way to get more of the story. Missed a stop? Check the website for the Tour Page http://www.ginikoch.com/blogtour.htm and get caught up.

And don’t forget to get entered to win a copy of The Night Beat at EVERY blog tour stop along the way! Plus, follow the Tour ‘til the end and get entered for a mega-prize! So, grab your badge -- it’s time to join Necropolis Enforcement! 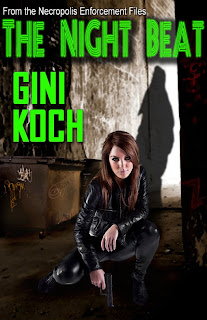 The majority of Prosaic City’s residents don’t know that their town exists on top of another place -- Necropolis, City of the Undead. For the most part, the two planes of existence manage to remain separate. And when they don’t, Necropolis Enforcement has beings in place to ensure the general human population remains blithely clueless.

Victoria Wolfe is more than just a policewoman. She’s an undercover werewolf assigned by Necropolis Enforcement to work Prosaic City Police’s Night Beat. Victoria’s comfortable working the shift where all the weird comes out to play, especially since her partner is also her perfect man. Or would be, if Victoria could ever work up the nerve to tell him she isn’t like other girls.

It’s hard enough being a werewolf in disguise, but when a creature from the Depths of Hell shows up in an alley preferred by junkies, bums, and hookers, it’s going to take more than just Victoria’s special gun and werewolf skills to subdue the ancient Sumerian demon. Especially when the demon is merely the start of what appears to be a major takeover attempt by the Prince of Darkness.

Soon all of Necropolis Enforcement’s Undead Brigade is involved in the fight to stop the Prince’s Major Minions from taking over Prosaic City and the rest of the human plane. But it’s Victoria who has to face the Adversary and figure out what intricate plan Lucifer has up his wings before everyone she cares about is destroyed.

In other words, it’s just another day on the Night Beat.

I went over to watch Ken work and Jack came with me. Ken had one hand on a dead hooker’s head, thumb and forefinger on the temples, with the other on the heart. He was concentrating.

“What’s he doing?” Jack whispered to me.

“Seeing if they’re worth reviving.” Ken had a perfect track record so far -- he’d never brought back a potential minion.

“Yeah, well, there are ways. I mean, they won’t come back as human, but being a zombie’s not as bad as it’s cracked up to be. And there are other options. Hookers usually come back as succubae. It’s typecasting, but it works.”

“What do the junkies and bums come back as?”

“They’re already too close to the Prince.” This was true. There were so many sins out there, and everyone indulged in at least one of them, even if they thought they didn’t. But junkies were among the most willful, more so than alcoholics, adulterers, or murderers. Pedophiles, rapists and junkies rarely got a second shot at life from us. We had standards and we also had history to back up our decisions.

“Who’s the Prince?” Jack asked as Ken shook his head and moved on to the next body.

“The Prince of Darkness.”

“Oh. The Devil. Or is that Count Dracula?”

“Neither.” I struggled to put the right words around what the Prince really was.

“Count Dracula gets a bad rap for no good reason,” Ken offered. “He’s one of the main reasons the Prince hasn’t taken over.”

“And the Devil’s really Yahweh’s servant,” Maurice added as he joined us.

“The entity most humans call God’s real name.” I was very fond of Yahweh, some because he was strong and righteous, mostly because he was the strongest god fighting against the Prince and it paid to support your boss.

Ken interrupted Jack. “Yes, he does. But there are also more gods out there than you can count. And they all have a variety of names. But each prefers the name he or she feels is truly theirs. The one you’re talking about is named Yahweh. He likes his name used, by the way, though not in vain.”

“So, what does he do when someone says ‘God damn it’?” Jack sounded ready to sign up for H.P.’s Gods and Monsters for Beginners class at Necropolis U. I was getting worried.

“He laughs,” Maurice replied. “If he even hears it. ‘God’ is a general term. Now, if you cursed using his real name, then he’d be taking an interest. But when someone goes, ‘Oh God, oh God’ and then orgasms, it’s just a general statement, sort of like ‘the sky is blue’ or ‘demon kind are scary’.”

My wrist-com came to life as the Count calmly answered. “Evil incarnate.” 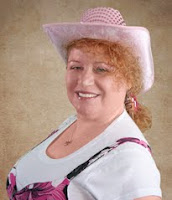 Authors Bio:
Gini Koch lives in Hell’s Orientation Area (aka Phoenix, AZ), works her butt off (sadly, not literally) by day, and writes by night with the rest of the beautiful people. She writes the fast, fresh and funny Alien/Katherine “Kitty” Katt series for DAW Books, the Necropolis Enforcement Files series, and the Martian Alliance Chronicles series for Musa Publishing. As G.J. Koch she writes the Alexander Outland series for Night Shade Books. She also writes under a variety of other pen names (including Anita Ensal, Jemma Chase, A.E. Stanton, and J.C. Koch), listens to rock music 24/7, and is a proud comics geek-girl willing to discuss at any time why Wolverine is the best superhero ever (even if Deadpool does get all the best lines). She speaks frequently on what it takes to become a successful author and other aspects of writing and the publishing business. She can be reached through her website at www.ginikoch.com.

And now for the giveaway! Gini has graciously offered one ebook to one lucky reader. To enter, just leave a comment with a valid e-mail address. The giveaway is open internationally and will last through midnight EST on Saturday, September 29th. Winners will be chosen using random.org on Sunday, September 30th.
Posted by Sara M at 8:00 AM