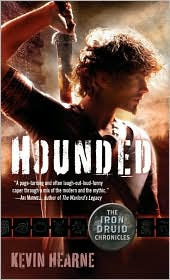 Atticus O’Sullivan, last of the Druids, lives peacefully in Arizona, running an occult bookshop and shape-shifting in his spare time to hunt with his Irish wolfhound. His neighbors and customers think that this handsome, tattooed Irish dude is about twenty-one years old -- when in actuality, he’s twenty-one centuries old. Not to mention: He draws his power from the earth, possesses a sharp wit, and wields an even sharper magical sword known as Fragarach, the Answerer.

Unfortunately, a very angry Celtic god wants that sword, and he’s hounded Atticus for centuries. Now the determined deity has tracked him down, and Atticus will need all his power -- plus the help of a seductive goddess of death, his vampire and werewolf team of attorneys, a sexy bartender possessed by a Hindu witch, and some good old-fashioned luck of the Irish -- to kick some Celtic arse and deliver himself from evil.

Plot: 5 Stars
Normally, male main characters within the Urban Fantasy genre fall a bit short for me in comparison to many of their female counterparts, but Hounded is by far the best Urban Fantasy with a male lead that I've ever read. And it's definitely my favorite read so far this year. This novel was refreshing in it's use of gods and goddesses (and Druids, of course) that don't normally make appearances in Urban Fantasy, while still blending in the normal paranormal creatures like werewolves and vampires. And there was a perfect balance of humor between the action scenes. Some of my favorite scenes were flashbacks in which Atticus' history unfolded and I learned more about what it meant to be a Druid. Everyone that loves Urban Fantasy needs to go out and get a copy right now!

Pace: 5 Stars
When I picked this novel up from the post office, I put down whatever I was reading at the time, and immediately jumped right in. I had been waiting in anticipation for this novel since last year, and it definitely didn't disappoint. I gobbled it up in just a few days, and can't wait for the next installment. Even though they're being released in three consecutive months, the waiting is killing me. I need the next one right now! There was never a dull moment while reading Hounded. Whether Atticus was out for a run with Oberon, working at the bookstore, or fighting against the bad guys, the pace never let up.

Characters: 5 Stars
Although I absolutely loved Atticus, Oberon, his talking dog, really stole the spotlight. From his random obsession with Ghandi to his lusting for a harem of French poodles, Oberon made me laugh on a number of occasions. The author did a great job of making Oberon able to converse with Atticus, without seeming too human. He still looked at the world like a normal dog would, and had all of the instincts. I loved all of the information about Druids weaved into the novel. There was never a moment in which I felt like the author was dumping details about Atticus' heritage or history, which made learning about him that much more interesting. The Morrigan is one of those characters I hope to see more of in future novels because she's a wild card, completely unpredictable. Atticus' Irish neighbor, Ms. MacDonaugh, brought along her own share of giggles too, especially when she said, "A friend will help ye move...but a really good friend will help ye move a body."

Cover: 5 Stars
I'm not gonna lie, my first thought upon seeing this cover was, "I wanna hit that." The cover model is one hot dude, definitely my type. My personal preference aside, I also think he was perfect to depict Atticus. This cover has a simplicity that works really well, while showcasing two important objects: Atticus' necklace and sword. I always enjoy when important details to the story are included in the cover. It makes the cover extra special. My favorite part of this cover (besides the model) is that the title and the series details below it are in relief. I love it when I can run my hand over a cover and feel different elements. I also really like the font choice for the title. It has a spray paint/grafiti feel that fits the novel. I just wish Oberon could've made an appearance on the cover somehow, although it would have become too crowded. I also love that the next two covers work so well with this first one, while still standing on their own through the use of color.

Disclosure: I won a copy of this novel in a giveaway at The Spinecracker.