First off, I'd like to thank Kelly Gay for taking the time to answer my questions. I'm very excited to be posting my first author interview, and I hope everyone enjoys! Plus, I'm giving away my ARC of The Better Part of Darkness. Information is at the bottom of the post. And my review of TBPD can be found here.

Sara: How would you describe your novel, The Better Part of Darkness, in three sentences or less, for readers who haven’t heard of it before?

Kelly: Hi Sara! Thanks for having me over to talk shop! :) The story takes place in Atlanta about a decade after the discovery of two alternate dimensions: heaven-like Elysia and hellish Charbydon. Atlanta has become a crossroads of sorts, a thriving melting pot of human and off-world races, and it’s Charlie Madigan’s job to keep the peace between all factions. But when an off-world drug is released in Underground and her ex makes a terrible bargain to win her back, there’s nothing Charlie won’t do to set things right.

Sara: How do you pronounce Elysia and Charbydon? And where did the idea for these alternate dimensions come from? 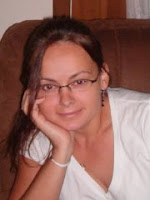 Elysia is a take on the Elysian fields, the final resting place for heroes and the virtuous in Greek mythology. And Charbydon is a combination of Greek myth words: Charybdis, the sea monster and daughter of Poseidon and/or whirlpool depending on which myths you read, and Charon, the being who ferried souls across the river Styx to the side of the underworld.

Sara: How would you describe your main character in one sentence?

Kelly: Charlie is a single mom and law enforcement officer who doesn’t have all the answers, all the strength, or all the beauty, but she does have an intense protective instinct and would fight to the end for her loved ones and her city.

Sara: Not many main characters within the Urban Fantasy genre have kids or have started families. Did you intend for Charlie to be a single parent from the beginning, or was it a surprise?

Kelly: No, not a surprise. The character of Charlie came to me as a full-fledged woman and mom with a lot of history and baggage. I knew from the beginning that I wanted to write about a character with those kinds of complexities and conflicts. It wasn’t sure at first how old her child would be, what gender, or what the circumstances were behind the birth, but I always thought of her in that role of mother, protector, and hero.

Sara: Without giving away any spoilers, can you us a little bit of information about the sequel, The Darkest Edge of Dawn?

Kelly: Hmm. Well, I can tell you that things between Elysians and Charbydons are pretty tense, more so than they’ve ever been since their truce over a decade ago. Anything can tip the scales and send them back into waging war and using our planet as a battleground. And with a killer on the loose, and the elite of Elysia going missing, Charlie’s going to have one hell of a job keeping the peace this time around.

Sara: Who are your greatest influences, both in and out of the Urban Fantasy genre?

Kelly: Marion Zimmer Bradley, Mary Stewart, Anne Rice, Margaret George, Alexandre Dumas, Mary Shelley… All have a way with conflict, characters, and worlds that is just amazing and inspiring. In urban fantasy I was really inspired by Emma Bull and Laurel K. Hamilton and then by Kim Harrison.

Sara: What are you currently reading?

And now onto the giveaway. I'll be giving away my ARC of The Better Part of Darkness by Kelly Gay since I've bought myself a final copy. It's already been read, but I kept really good care of it.

Atlanta: it's the promised city for the off-worlders, foreigners from the alternate dimensions of heaven-like Elysia and hell-like Charbydon. Some bring good works and miracles. And some bring unimaginable evil...

Charlie Madigan is a divorced mother of one, and a kick-ass cop trained to take down the toughest human and off-world criminals. She's recently returned from the dead after a brutal attack, an unexplained revival that has left her plagued by ruthless nightmares and random outbursts of strength that make doing her job for Atlanta P.D.'s Integration Task Force even harder. Since the Revelation, the criminal element in Underground Atlanta has grown, leaving Charlie and her partner Hank to keep the chaos to a dull roar. But now an insidious new danger is descending on her city with terrifying speed, threatening innocent lives: a deadly, off-world narcotic known as ash. Charlie is determined to uncover the source of ash before it targets another victim -- but can she protect those she loves from a force more powerful than heaven and hell combined?

Answer the following question: Which alternate dimension would you rather visit, heaven-like Elysia and hellish Charbydon?

You must leave a vaild e-mail address.
This contest is open to the US and Canada only.

** This giveaway will end at midnight EST on Saturday 12/19 and the winner will be announced Sunday 12/20. Winners will be chosen using Random.org.
Posted by Sara M at 4:20 PM